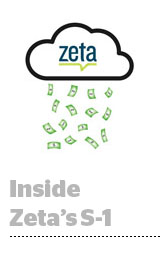 Zeta Global filed its S-1 paperwork Monday. Zeta has not yet determined the number of shares it will offer or the price.

However, revenue growth and positive EBITDA are two signs investors look for when evaluating an IPO.

Zeta describes itself as an omnichannel marketing platform and said in its filing it deployed 6 billion emails a month, making it a top-three email service provider. Zeta also counts itself a top ten programmatic platform because it delivers 3 billion impressions a month on CTV. Zeta’s identity sync is also used across social media platforms including Facebook, where it averaged 750 million impressions per quarter.

Zeta revealed that it works with more than 1,000 customers.

It’s par for the course for software companies to emphasize recurring revenue, so Zeta’s S-1 emphasizes its longstanding customers. It counts 336 “scaled” customers who contribute more than $100,000 to Zeta’s revenue per year. Sixty-eight of those generate more than $1 million in revenue for Zeta per year; 143 of those scaled customers have worked with Zeta for more than three years, with an average revenue per user (ARPU) of $3.8 million.

In total, those scaled customers punch account for 42.6% of Zeta’s customer base and 65% of its revenue.

Zeta’s habit of buying distressed ad tech seems to be working in its favor.

Zeta revealed that it paid $21.6 million for IgnitionOne, which it bought when the company became insolvent in fall 2019. Through December 31, 2019, the company contributed $10.4 million in revenue.

Sizmek’s DSP and DMP, sold after Sizmek filed for bankruptcy, got snapped up for $31.9 million, slightly less than the “up to $36 million” previously reported, and contributed $18.1 million in revenue in 2019, the year of its acquisition.

And Zeta’s 2019 take over of PlaceIQ cost $1.28 million. PlaceIQ gave its customers to Zeta Global and agreed to refer customers who wanted to use PlaceIQ data over to Zeta.

Although Zeta noted the risk of a privacy-focused regulatory environment, the company operates the commenting platform Disqus, its trump card for when third-party cookies go away.  Disqus, implemented on 6.2 million publisher websites and 15 billion webpages, gives Zeta opted-in data. Zeta bought Disqus for $90 million in 2017.

Zeta also lets its clients use its own first-party cookie for targeting and measurement. While its data and identity graph is enriched through some third-party data partnerships, Zeta said its customers’ data remains “technically separated.” Plus, it never shares PII with its customers, even when that data is used to produce its customers’ reporting and analytics.

“Even if cookies and ad blockers do not ultimately have an adverse effect on our business, investor concerns about the utility and robustness of these tracking technologies could limit demand for our stock and cause its price to decline,” Zeta warned investors in its filing.

What does Zeta actually do?

Zeta Global has tied many of its bargain basement ad tech purchases from 2019 (the Sizmek DSP and DMP, the Rocket Fuel DMP, PlaceIQ and IgnitionOne) into what it calls the Zeta Marketing Platform. It stitches everything together with an identity graph.

Coupled with its first-party data from Disqus and from its newsletter business, investors must decide if these features are the golden ticket in ad tech’s next chapter.

Want more? Read a 2020 interview with CEO and co-founder David Steinberg and listen to his appearance in the AdExchanger Talks podcast in November.