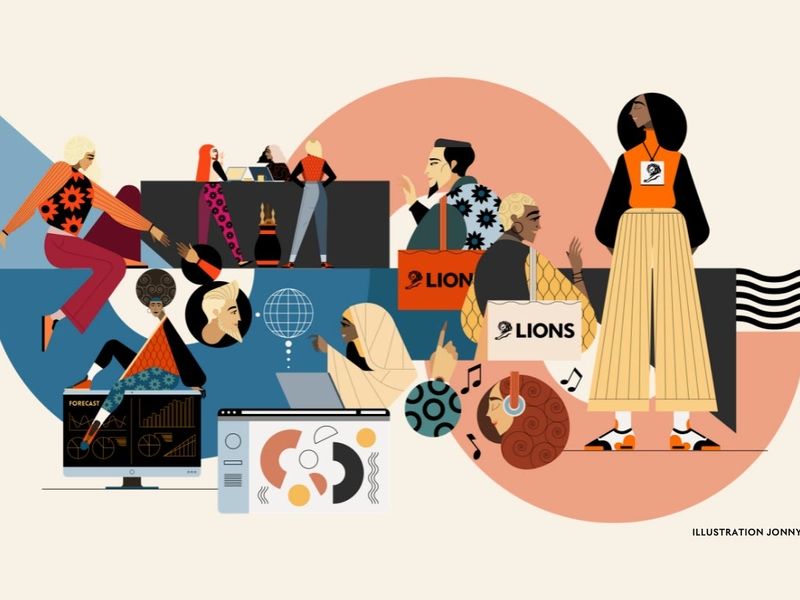 Somehow, virtual Cannes captured the annoyances and excesses of the real thing, complete with off-the-main-drag pop-up industry side conferences and panels—and media requests for one-on-one interviews “during” Cannes. It’s a little tough to figure why these things can’t be spread out over more weeks when there’s no excuse about the whole industry coming together in person for a week. Enough to make you want to drink yourself silly on Rose while sitting by your laptop.

5. The pandemic didn’t take over

Despite some concern that pandemic-focused work would dominate, the winners list looks much like any other year. Dove’s “Courage Is Beautiful” campaign did take the Grand Prix in Print and Publishing and Industry Craft, but pre-pandemic mainstays like Burger King’s “Moldy Whopper” and Nike’s “Dream Crazy” still resonated with judges even after what feels like a lifetime since they debuted. Looking at the results, the world’s biggest problems appear to be climate change, racial justice and gender issues, not health care. Among the Sustainable Development Goals entries, 80% had nothing to do with the pandemic, according to Jury President Eduardo Maruri, VP Global Creative Board and President/CEO Europe at Grey Worldwide.

6. But the pandemic mattered

Nevertheless, pandemic-related work did capture the juries’ hearts. Dove was able to underscore the power of and evolution of  its long-running “Real Beauty” platform with “Courage Is Beautiful.” The effort put healthcare workers at center stage and earned a Grand Prix in both Outdoor and Industry Craft. On the final day of the festival, Nike’s “You Can’t Stop Us” ad, which showed athletes and everyday folks’ persistence in the face of 2020’s hurdles, earned the top prize in film, while the Creative eCommerce Grand Prix winners, Anheuser-Bush InBev’s “Tienda Circa” and LinkedIn’s “Raising Profiles,” aimed to help small business vendors struggling during COVID.

Asked about this year’s winners, Asan Aslam, Fig’s executive creative director, said ”I haven’t seen anything funny yet. I think the industry needs to bring funny back soon.”  Among the festival’s Grand Prix winners, the only comedic honorees were in Creative Strategy, which went to Cheetos’ Super Bowl ad starring MC Hammer from Goodby Silverstein & Partners, and in Entertainment for Music, which honored Lil Nas X’s “Old Town Road” video directed by Prettybird’s Calmatic.

8.  Google got its beachhead anyway

There was no Google Beach, yet Google still managed to steal the show by announcing a nearly two-year delay to its plan to stop supporting cookies in Chrome and unleash its FLoCs on the world.

9. There’s nothing sexier than sanitary protection

Swedish-based Essity won an amazing four Grand Prix, including the most coveted Titanium, for a campaign behind its Libresse sanitary protection brand. The AMV BBDO #WombPainStories work actually had little to do with the products and much to do with the pain women suffer from endometriosis. It was the best showing for the product category, though, since equally non-product-focused work from Procter & Gamble’s Always in 2015 won a PR Grand Prix for standing up against the condescension of the phrase “Like a Girl” and a Glass Lion for taking on taboos about menstruation in India.

10. Hacking is still in vogue

Burger King has won several Lions for its ideas that “hack” the system. In the past, the quick service restaurant picked up Grand Prix for campaigns such as “Whopper Sacrifice” and “Google Home of the Whopper” for cleverly getting its brand onto platforms like Facebook and Google Home, respectively. This year, its “Stevenage Challenge,” from David Madrid and David Miami, was one of the big winners of Cannes, taking home three Grand Prix in Social, Influencer, Direct and Brand Experience and Activation, for hacking into videogame FIFA20 by sponsoring a low-level soccer team. It’s a strategy that seems to continue to please Cannes Lions judges. This year, Reddit took a page out of Burger King’s playbook and ended up winning a Social, Influencer Grand Prix alongside Burger King for hacking into the Super Bowl with a 15-second spot.

The City of Chicago was a big-time winner at Cannes, walking away with 15 Lions, most of them for its “Board of Change” campaign which won a Media Grand Prix and a Titanium Lion. The effort from FCB Chicago upcycled old billboards that had appeared on the city’s streets during social justice protests, transforming them into striking voting booths. The agency’s former leader, Michael Fassnacht, now serves as Chicago’s chief marketing officer. But Chicago’s creative surge for pro bono work is not limited to FCB. The city in October last year began encouraging all local shops to pitch in with its “By Chicago. For Chicago” effort, which includes a commitment by creative agencies to dedicate one percent of all hours worked towards non-profit, social and cultural organizations and city agencies.

Over the years, Cannes jury members have increasingly favored work that goes beyond the mere sell. The majority of the big winners were purpose driven, even though they weren’t attached to categories that inherently required them to be so. Part of the goal of big winner “#WombPainStories” was to help better articulate women’s experiences of endometriosis in order to help them get diagnosed more quickly. FCB agency Area23’s “Sickbeats” campaign earned double Grand Prix in Pharma and Radio/Audio for its innovative music vest that offered a more enjoyable form of therapy for cystic fibrosis patients; the Innovation Grand Prix went to Unilever’s “Degree Inclusive,” an accessible deodorant, and both Creative and eCommerce Grand Prix, which went to ABInbev’s “Tienda Cerca” and LinkedIn’s “Raising Profiles,” had good baked in.

13. Jim Stengel can rock a blazer

Former P&G exec Jim Stengel took it upon himself to pay tribute to a former business rival, Keith Weed, the retired Unilever exec known for his bold taste in blazers. For his CMO Accelerator interview with Weed, Sengel turned out in full-on purple paisley.